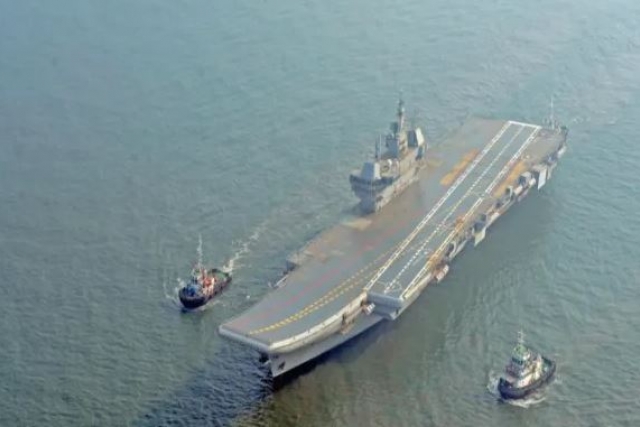 The race to supply brand new fighters to be operated on the 40,000-ton Indian aircraft carrier INS Vikrant (Indigenous Aircraft Carrier 1 or IAC 1) is heating up with the country starting tests of finalists - French Rafales and U.S.-made Super Hornets.

Vikrant is planned to be commissioned in August 2022. It is now undergoing extensive sea trials in the Arabian Sea and the Indian Ocean. Indian MiG-29Ks would be first to do its carrier compatibility trials in order to get the ship operational.

Since the carrier has been designed as a ski-jump launch ship, the aircraft must be capable of taking off safely with its weapon and fuel load for a typical mission. Both Rafale and Super Hornet were catapult launch aircraft and modifications have been made to them so that they could qualify for the Indian order.

The Indian Navy wants to initially buy 26 aircraft (18 single seaters and 8 twin-seat trainers). It issued a Request for Information (RFI) for 57 multirole aircraft for its aircraft carrier in 2017.

A request for an operational demonstration has already been sent to the U.S. and French embassies.

An important aspect of the trials would be the handling of these aircraft on the deck of Vikrant. It is vital to check how quickly and how many aircraft can be parked on the deck and how many in the hangar, and their ability to fit into the deck edge lift for movement to and from hangar to the flight deck.

France is offering the naval variant of Rafale fighter built by Dassault Aviation, many of which are in service with the Navy. The Rafale-M has a reinforced under-carriage and a nose wheel, a bigger arrester hook, an integrated ladder and other minor differences from the Air Force’s Rafale variant.

Rafale-M is designed to operate from the French Navy’s nuclear-powered Charles De Gaulle aircraft carrier which is configured with catapult launch gear. It is also the only non-U.S. fighter cleared to operate from U.S. carriers.

As per earlier reports, Rafale-M was supposed to be put through rigorous trials for around 12 days at the 283m mock-up ski jump facility. It would apparently be the first time that the jet will prove its compatibility with a ski jump ramp, used in lieu of catapult launch gear in the short take-off but arrested recovery (STOBAR) concept of operations. The SBTF also replicates the carrier recovery process, with arrester wires on the runway for landings.

Boeing’s F/A-18 Super Hornet will follow suit in March. The aircraft’s latest Block III form has already participated in some high-profile ski jump operations using the ground-based ramp at Naval Air Station Patuxent River in Maryland. The company claims it developed a capability specifically for this jet that will allow for the faster movement of the aircraft between the flight deck and hanger deck, without having to remove or modify any part of the aircraft.

Surendra Ahuja, managing director, Boeing Defense India, told Economic Times that the fighter will now be able to fit the elevator onboard Indian aircraft carriers – a critical requirement for the Navy as the current design is suited for smaller aircraft like MiG-29Ks which India has. “This capability is compatible with the current elevator configuration aboard Indian aircraft carriers,” he said.

Dassault Aviation’s solution to the problem included removing part of the Rafale wing before it can fit the carrier elevator. It is important to move carrier-borne jets into the hangar for maintenance works as well as to create space for other equipment and aircraft on the flight deck.

French Defense Minister Florence Parly expressed her willingness to supply the carrier-based Rafale to India during her visit to the country in December 2021. “We know the aircraft carrier will be arriving soon…and that planes will be required. If India decides to buy another Rafale, we are ready to offer it,” she stated.

She also declared that France would supply additional Rafale fighters over and above the 36 being acquired by the IAF, if India needs it.

The Super Hornet Block III is the most sophisticated variant of the Super Hornet and outperforms fourth-generation fighter capabilities. The U.S. Navy received its latest block III variant in September last year.

The jet can presently operate from a “ski-jump” ramp and has significant upgrades that include improved network capability, longer range, lower radar signature, a more modern cockpit, and a better communication system.

This fighter comes with shoulder-mounted fuel tanks that can accommodate up to 1587kg of additional fuel. This will help to reduce drag and allow the aircraft to fly for longer periods of time and carry greater weight.

Experts believe the Rafale-M deal will have an advantage because of the $8.7 billion contract reached between India and France for 36 Air Force variant jets a few years ago. The weight-to-power ratio of the Rafale, as well as its maritime strike capabilities could work in its favor.

The METEOR missile, a robust radar, and an upgraded Spectra electronic warfare system are all included in the Rafale M (Marine) version being pitched to the Indian Navy. It also includes the GBU16 500kg laser-guided bomb in terms of weapons. It has a better warning capability and is more resistant to GPS jamming.

With the incorporation of the new laser designation pod, the naval variant of the Rafale has improved ground target recognition and designation capability (TALIOS). It also includes a built-in next-generation refueling pod (NARANG). Air-to-air refueling is also possible with the aircraft.

There have also been reports of some issues with the wingspan of aircraft and its ability to fit onto the lift (required to move aircraft from the deck to their storage area beneath), particularly the Super Hornet. It is likely to have been addressed by the manufacturer. 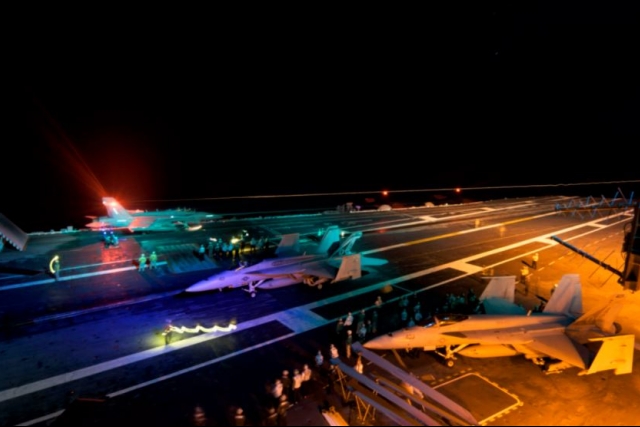 Do MiG-29K Jets Still Have a Chance?

The existing inventory of MiG-29K will be tested on INS Vikrant first. These jets currently operate from ski jump on board the Vikramaditya and therefore, the test pilots and engineers will be in a familiar environment onboard Vikrant which has a similar design.

But MiG-29Ks have faced some difficulties during their operational service. There have been a number of accidents involving Indian MiG-29K jets.

A report from India’s Comptroller and Auditor General (CAG) tabled in parliament in July 2016 questioned the safety of the twin-engine MiG-29K. The CAG charged that India’s MiG-29K fleet “is riddled with problems relating to [its] airframe, RD MK-33 engine and fly-by-wire system.” It also pointed at the occurrence of mid-air engine failures.

“Aircraft is being technically accepted despite having discrepancies/anomalies,” the report said.

The CAG said the life of the MiG aircraft was 6,000 hours or 25 years (whichever is earlier) and with issues facing the plane, the operational life of the aircraft already delivered would be reduced. 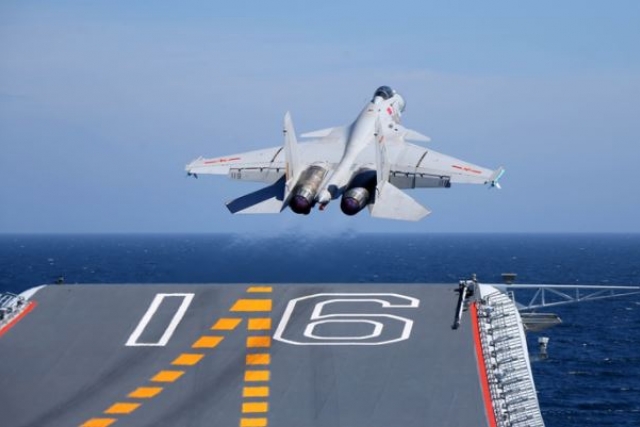 As of September 2014, India accepted 65 engines (42 with 21 aircraft and 23 spares) to power the aircraft. “Since induction in February 2010, 40 engines had been withdrawn from service/rejected due to design-related defects/deficiencies,” the report said.

These defects reportedly led to 10 cases of single-engine landings, meaning one of the engines failed mid-air and the pilot landed back on one engine.

Since the aircraft carriers have long service life (in the range of 30-40 years), the Navy must look beyond-MiG 29K option at this stage. There is also a proposal for building IAC II which will need fighter aircraft.

Between November 2019 and November 2020, the service lost three of them to accidents. The first loss of an Indian MiG-29K occurred in January 2018 when one of those jets veered off a runway and caught fire.

Given China’s rapidly growing Navy and recently inducted J-15 carrier borne jets, the Indian Navy would want a carrier that measures up to the Chinese sea assets.

Experts say the upgraded J-15 ship-borne fighter is operable on both China's old aircraft carriers that use ski-jump ramps and new ones that use catapults.

According to Chinese state media, the jet uses a new type of wingtip pylon - the same type as the J-16 fighter jet. It can carry China's most advanced short-range combat missile, the PL-10, while the previous version could only launch the older PL-8, the report said, noting that the PL-10 is much deadlier than the PL-8, as it can be launched as soon as the pilot sees the target, and it is very difficult to evade thanks to its extreme maneuverability and advanced infrared guidance.

The aircraft also has infrared search and track systems in front of the cockpit. The front of the wings has been changed, which could mean the avionics systems of the new J-15 were improved.

Another major change is the difference in the radar, as the lightning diverter stripes on the new radome are not the same as the old one. This may mean that the upgraded J-15 could have switched to an advanced, active electronically scanned array (AESA) radar system, which enables the use of China's most advanced PL-15 beyond-visual-range air-to-air missile.