US Trying To Force Pak Into Limiting Small Tactial Nukes 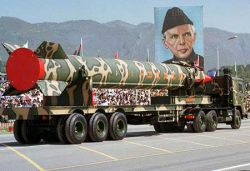 US believe securing the smaller arsenal is far harder than to secure Pakistan’s larger weapons. US is holding talks ahead of Pakistan’s Prime Minister Nawaz Sharif’s visit to Washington next week, The Express Tribune reported Friday.

The smaller nukes are modelled on weapons the US put in Europe during the cold war to deter Soviet invasion. Disucssions are being led by Peter Lavoy, an intelligence expert on Pakistani program and also staff of the National Security Council.

But outside experts familiar with the discussions, expressed deep skepticism that Pakistan is ready to put limits on a program that is the pride of the nation, and that it regards as its only real defense against India.

“A deal like the one that’s been discussed publicly is not something that’s likely to come to fruition next week,” Josh Earnest, the Pentagon press secretary, when asked about the talks was quoted as saying by the newspaper Tuesday.

“But the United States and Pakistan are regularly engaged in a dialogue about the importance of nuclear security. And I would anticipate that that dialogue would include conversations between the leaders of our two countries,” he added.

The central element of the proposal, according to other officials and outside experts, would be a relaxation of strict controls put on Pakistan by the Nuclear Suppliers Group, a loose affiliation of nations that tries to control the proliferation of weapons.

“I think it’s worth a try,” Perkovich said. “But I have my doubts that the Pakistanis are capable of doing this.”

American officials have told Congress they are increasingly convinced that most of Pakistan’s nuclear arsenal is under good safeguards, with warheads separated from delivery vehicles and a series of measures in place to guard against unauthorised use. But they fear the smaller weapons are easier to steal, or would be easier to use should they fall into the hands of a rogue commander.

“All it takes is one commander with secret radical sympathies, and you have a big problem,” said one former official who dealt with the issue.

The message appears to have resonated; an unknown number of the tactical weapons were built, but not deployed. It is that problem that Lavoy and others are trying to forestall, along with preventing Pakistan from deploying some long-range missiles that could reach well beyond India.

But American leverage has been hard to find. Unlike Iran, Pakistan never signed the Nuclear Nonproliferation Treaty, the international agreement that prohibits nations, except for existing declared nuclear states like the United States, from possessing a nuclear arsenal. Pakistan is not alone in that distinction: India and Israel also have not signed.

Ordinarily, any country’s refusal to sign the treaty would preclude American nuclear cooperation. So Pakistani officials remain angry with the American decision to enter an agreement with India in 2005 allowing India to buy civil nuclear technology, even though it remains outside the treaty and put no limits on its nuclear programme.

Under that agreement, India’s nuclear infrastructure was split with a civilian program that is under international inspection, and a military programme that is not.

That does not appear to be on the table. Instead, the United States is exploring ways to relax restrictions on nuclear-related technology to Pakistan, perhaps with a long-term goal of allowing the country to join the Nuclear Suppliers Group, which regulates the sale of the technology. That would be largely symbolic: Pakistan manages to import or make what it needs for its nuclear arsenal, and China has already broken ground on a $9.6 billion nuclear power complex in Karachi. PM Nawaz presided over the ceremony. 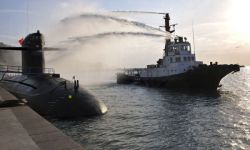 Beijing and Islamabad will build eight submarines simultaneously, of which half will be built in China and the other half in Karachi. China will transfer the submarine technology to Pakistan, Beijing-based Reference News reported Wednesday

US To Supply ScanEagle Drones To Pakistan, Cameroon And Kenya

Russia may be working out a deal to sell Su-35 aircraft simultaneously to Pakistan and China, making it the biggest order of the most advanced in-production fighter in Russia. While Pakistani officials admitted to an international...

The US General Services Administration has issued a Request for Proposal (RFP) for a $50 billion contract to provide telecommunications and IT services as part of Network Services 2020 program. The RFP which was edited on...